Coming from a family who all love sport, her grandfather played for Aston Villa Football Club, Sophie was inspired to take up running after watching the London 2012 Paralympic Games. After some encouragement from her brother, Sophie attended an athletics taster day at Loughborough University. In October 2012, she joined a sprint group at Charnwood AC and took her first steps on a track, Sophie was 15 at the time.

The following year, Sophie was selected to represent Great Britain at the 2013 International Paralympic Committee World Championships in Lyon, France. At just 16, and running from a standing start, Sophie became World Champion and World Record holder in the T38 100m. Following her success, Sophie was invited to join the UK Sport World Class Performance Programme where she has remained since.

2016 started with Gold at the European Championships in Grosseto, Italy, along with another relay team Gold and a new World Record. Then it was on to Rio de Janeiro for the 2016 Paralympic Games. Sophie cruised through qualifying before taking the Gold medal in the 100m Final, in front of a passionate Brazilian crowd.

At the start of 2017, in recognition of her contribution to athletics, Sophie was awarded an MBE in the New Year’s Honours List, which was presented to her by William, Duke of Cambridge, an immensely proud moment.

2017 was a big year for Sophie on the track too, with the World Championships being held at home in the UK, in the London Olympic Stadium.  In front of an incredibly passionate home crowd Sophie not only won 100m Gold, she also won Gold in the 200m setting new World Records over both distances. At their Awards ceremony in London, Sophie was named Para Athlete of the Year by the Sports Journalist Association. She became an Ambassador for the Lords Taverners charity.

Winning the 2018 Commonwealth Games 100m, at 22, gave Sophie the Gold medal she needed to complete the Grand Slam.

In 2019 Sophie confirmed her dominance, retaining both the 100 and 200m World titles in Dubai, again lowering her World records over both distances.  In acknowledgement of these achievements Sophie was voted Para Athlete of the Year by the British Athletics Writers Association and by the British Athletics Supporters Club.  During 2019, Sophie signed a sponsorship deal with Nike who named the board room in their London Offices in her honour.   Amherst School in Loughborough also paid tribute to Sophie by naming one of their school houses Hahn House.

As a result of the global pandemic, the 2020 Tokyo Paralympic Games were postponed.  After almost a year away from the track Sophie returned in June 2021 to retain her European title over 100m in Bydgoszcz, Poland.  ​​​

The Tokyo Paralympic Games, postponed in 2020, finally took place in August / September 2021.  The Games were like no other, with athletes isolating in bubbles and competing in empty stadiums.  Undeterred, Sophie equalled her World Record in her qualifying heat, before winning Gold in the 100m Final.

With the support and encouragement of her family, her team, Nike, UK Sport and British Athletics, Sophie continues to train and work hard and is now one of Britain’s most successful athletes. The proud owner of two Paralympic golds, seven World golds, seven European golds and two world records. Perhaps unsurprisingly, many would be happy enough to settle for just that, but Sophie is not one of those individuals, she is an athlete driven to win time and time again, and to keep retaining those gold medals whenever she competes. 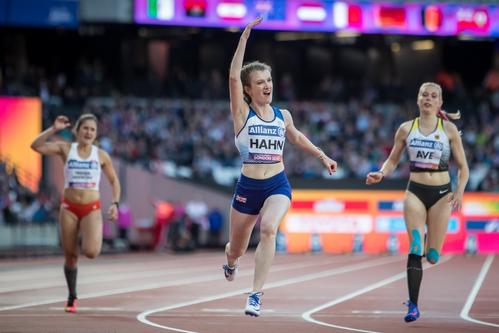